Vanguard College - A Legacy in Motion

Vanguard College was established in October 1946 as Canadian Northwest Bible Institute (CNBI) to serve as the theological and ministerial training center of the Pentecostal Assemblies of Canada Alberta & Northwest Territories District. Founding President Rev. Dr. D.N. Buntain opened the doors with an initial class of forty students and six part-time teachers. Classes were held in the original Central Pentecostal Tabernacle, located on Jasper Avenue and 108 Street in Edmonton. In 1965 the name of the school was changed to Northwest Bible College (NBC). By the late 1960s, NBC's enrollment had grown to nearly one hundred students.

In the Fall of 1975, the College purchased property of its own - a twelve thousand square foot building on 106 Avenue and 116 Street. The two-story building, which was named the D.N. Buntain Heritage House, housed offices, a student activity centre, learning spaces, and the library.

The college achieved candidate status with the Association of Biblical Higher Education (formerly AABC) in February 1997 and full accreditation in 2001. With the advance and interest in online learning, in 2002, the college partnered with IBOLT (International Biblical Online Leadership Training) to add a distance learning option for students.

A year of focus groups, surveys and meetings with the College constituency resulted in the PAOC Alberta and Northwest Territories District Conference passing a resolution to change the name of the College from Northwest Bible College to Vanguard College. The name change was finalized in May 2004 when the Alberta legislature assented to the Northwest Bible College Amendment Act and changed the name of the act to The Vanguard College Act.

In the summer of 2004, for the first time in its history, the College had a full campus of its own. Built in 1913, the H.A. Gray Elementary school building at 12140 103 Street is a stately 72,000 square foot historical landmark, with a 1950’s addition attached by a pedway. As the College has grown and developed, so too has the College library. In 2011 the College joined NEOS, a partnership of academic and special libraries in Alberta which gave our students access to more than 11 million resources ensuring that their research needs would always be met.

In 2019, following extensive work by the Board of Directors, the College mission statement was revised: “to develop and mobilize spirit-empowered leaders to be fruitful in God’s mission”, along with refreshed core values and vision statement. Further, the College’s online program, IBOLT, was renamed to Vanguard College Online, to better demonstrate the unity of online programs and courses with on-campus, giving students greater flexibility in the pursuit of their education.

April 2022 also saw the College celebrate its 75thanniversary. Since its beginning under Dr. D.N. Buntain in 1946, the College has invested in leaders who God has led into places of service and ministry across Alberta, Canada and the world. The mission to train leaders for ministry has not changed. Seventy-five years – a legacy in motion! 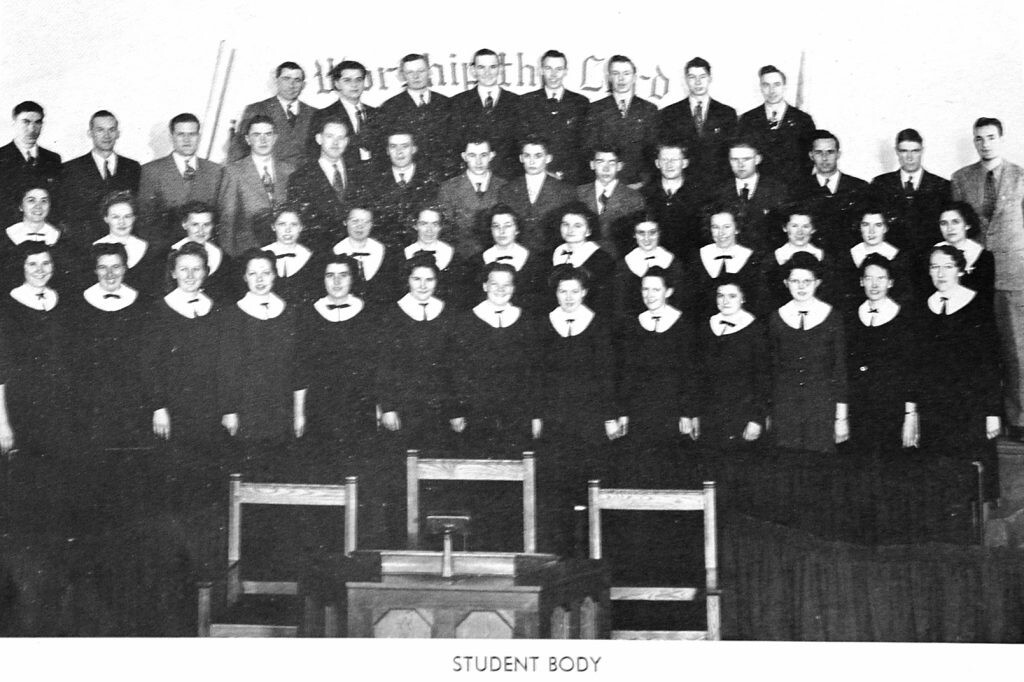